I always meant to read Stephen King‘s sequel to his classic 1977 novel The Shining but never did — perhaps because I knew I’d never like it in the same way I love Stanley Kubrick‘s 1980 adaptation of the original novel, a film I’ve seen many times over the years. So when I understood that the film adaptation of Doctor Sleep was somehow supposed to roll the Kubrick film into the mix, I was genuinely curious. It was also interesting to me that the film’s director, Mike Flanagan, is also the sole writer and editor of the film – either Flanagan loves to take on multiple tasks a la James Franco or this was a passion project for him.

The film is centered around an alcoholic and sombre middle aged Danny Torrance (played somewhat autobiographically by a seemingly burned out Ewan McGregor). Since the events in the first film, his mother Wendy has long since passed away and Danny roves from bar to bar and town to town like some sort of alcoholic Bruce Banner. Waking up from his rock bottom, he moves to a small New Hampshire town. Working at a hospice and attending AA meetings, he seems to find a niche administering to those ready to pass on beyond the mortal veil. However, from far away, a young girl, Abra (Kyliegh Curran) contacts him via the kind of megawatt gift Danny has in the first book/film – a powerful dose of The Shine. After years of telepathic correspondence, she tells him that there’s a group of eternals moving around and abducting children who have the Shine so they can torture the kids and drink their essences (apparently, fear purifies ‘the smoke’). You can call these predators whatever you want, but they’re basically vampires in another guise – so what you have is a vampire movie within a ghost movie within a redemption film within a sequel to one of the most famous art house horrors of all time. There’s some stuff about death and the afterlife thrown in there as well. None of these elements really gel with each other, and this explains the film’s poor performance at the box office.

Flanagan evokes The Shining by recreating certain scenes and sets. He even pulls in actors to mimic Shelley Duvall, Scatman Crothers, Danny Lloyd, and ultimately Jack Nicholson from the classic movie. It’s a little unnerving to see these scenes because your mind goes through a glitchy moment every time one occurs; trying to sort out if it’s the original footage doctored or completely re-shot. It reminds me of seeing Zack Snyder’s adaptation of Watchmen, which is so faithful in its look to the comic that it misses the point of the comic entirely. The same thing happens with Doctor Sleep. Some of the shots and the scenes are such faithful recreations that they seem like a wax museum on film as opposed to a living continuation of the Kubrick classic.

Kubrick’s The Shining was an unusual horror film in that it had a weird elliptical energy that eerily made spaces that were not contiguous with each other overlap: different spaces in the Overlook Hotel and its maze, the mental spaces involving Danny and Jack Torrance and the temporal spaces of the hotel itself. The latter was especially interesting because things seemed caught in a self-contained loop where events would repeat themselves or echo each other. At the end of Kubrick’s film, you didn’t know if Jack Torrance had been there before or whether he’d somehow been sucked into the hotel’s infinite aura. All those otherworldly Steadicam glides and tracking shots constantly made you feel as if everything and everyone were constantly being watched by things that were non-human.

Doctor Sleep does none of this. It’s not that the cinematography isn’t attractive. It’s just ultimately not that interesting. It goes through the paces of a typical horror adventure movie with clear protagonists and antagonists, some skirmishes and dramatic events, and ends at the Overlook Hotel (for a reason that I don’t think is narratively credible and thus, feels forced). Flanagan clearly wants this locale to have more meaning than it ultimately does. There are a couple of scenes in the film where middle aged Danny stands in locations completely recreated to evoke the original film. One of these occurs at the bar of the ballroom where Jack Torrance met Lloyd (Joe Turkel). McGregor sits where Nicholson once sat, there’s a trick cut which leads the bartender to suddenly appear where dead space once existed, and Nicholson’s character is now Lloyd pouring the drinks. Only, McGregor refuses to drink and the whole thing sort of feels flat and preachy. The impersonation of Nicholson is the weakest recreation from The Shining and it ruins the waxworks effect. I wish they’d actually got the aging Nicholson to play the character or perhaps an actor imitating Kubrick himself. Anything a little more off the beaten path would have been more imaginative and appreciated. Besides, if they wanted to repeat the pattern set up in the original movie, shouldn’t the Nicholson impersonator have been playing a waiter or caretaker in the same way Delbert Grady (Philip Stone) seems to be a waiter in the original – just before he tells Jack Torrance that he has always been the caretaker there, looping him in to the fabric of the spectral plane the ghosts inhabit? Middle aged Danny confronts antagonist Rose the Hat (Rebecca Ferguson) on the grand stairwell, releases the old ghosts he’s trapped in mental boxes, gets possessed by these ghosts, and even does something with the environs of the great maze, but none of these things build the creepy tension or ethereal oddness that immersed the original movie like a trans-corporeal solvent. 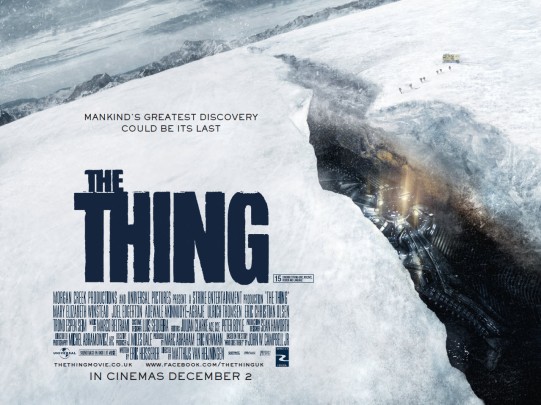 It made me wonder why I go to see prequels or sequels to films I really loved, helmed by other directors, long after the original has come out. Is it a misleading compound of nostalgia and fool’s gold that draws me in? When I went to see the prequel to John Carpenter‘s The Thing, I felt similarly. It wasn’t a bad movie so much as it was disappointing. For all that these movies try to create the look of the original, they only end up disappointing you even more, making you feel empty and frustrated inside. Remakes often have a similar effect on me. We go hoping that the filmmakers — obviously fans of the original movies like ourselves — will understand what we so love about these movies and then through a little bit of craft and magic, translate that essence back into a new project. It’s a vain hope and a vain endeavour. What we’re left with is not so much a ghost of a movie as its decaying cadaver. Sometimes these old movies should just be allowed to rest in their mental boxes.

Take A Trip Through The Criminal Underworld Of ‘Arkansas’

Henry Cavill’s Superman Cape Is “Still In His Closet,” But Michael B. Jordan May Be The Next Man Of Steel