Will Sabrina be a match for head witch, Della, in Sabrina the Teenage Witch: Something Wicked #5 finale?

(+++WARNING: This review contains spoilers for Sabrina the Teenage Witch: Something Wicked #5 +++)

If Hansel and Gretel taught us nothing, witches who live in cottages in the woods are not the sort that help children. Sabrina, Ren, and Radka may not be getting thrown into an oven when Sabrina the Teenage Witch: Something Wicked #5 begins, but they are getting prepped to have their life energy sucked out of them, so pretty much the same thing.

Last issue already pointed heavily towards Della being Greendale’s serial killer (because Riverdale isn’t the only Archie-verse town with a murderer on the loose). The thing is, Della didn’t need to be a serial killer to be this arc’s antagonist and the revelations around her knowing Ren and Radka’s mother were actually much more interesting, especially since writer, Kelly Thompson, has made Ren and Radka aware of Sabrina’s secret, so they can talk about what’s going on.

This was already clear from last issue, too, but Ren is exactly what Radka and Sabrina’s relationship needed to break their stalemate. Regardless of Sabrina’s love triangle drama (and Sabrina had to mention Harvey again so it’s not over, even though it would be nice if the series would let that relationship go), they’re the triangle that matters if this series comes back for a third arc. And while this issue only mentions the trade paperback edition of Sabrina: Something Wicked is coming out in the spring, the final words aren’t “The End” but “Next!?!?!” so that certainly leaves the door open for another arc. If Sabrina ends up transferring to The Academy, though, as Ambrose suggests, doesn’t that just leave a lot of storylines unresolved? Her friendship with Jessa, for one, is barely clinging to life as it is.

Jack Morelli‘s letters this issue are a blast, especially when Ren and Radka transform into a wendigo. Their speech bubbles are big and exaggerated, but shaky at the same time, and it tells you this whole story of how they’re new at this but trying – maybe a little too hard – yet that doesn’t mean they aren’t menacing. 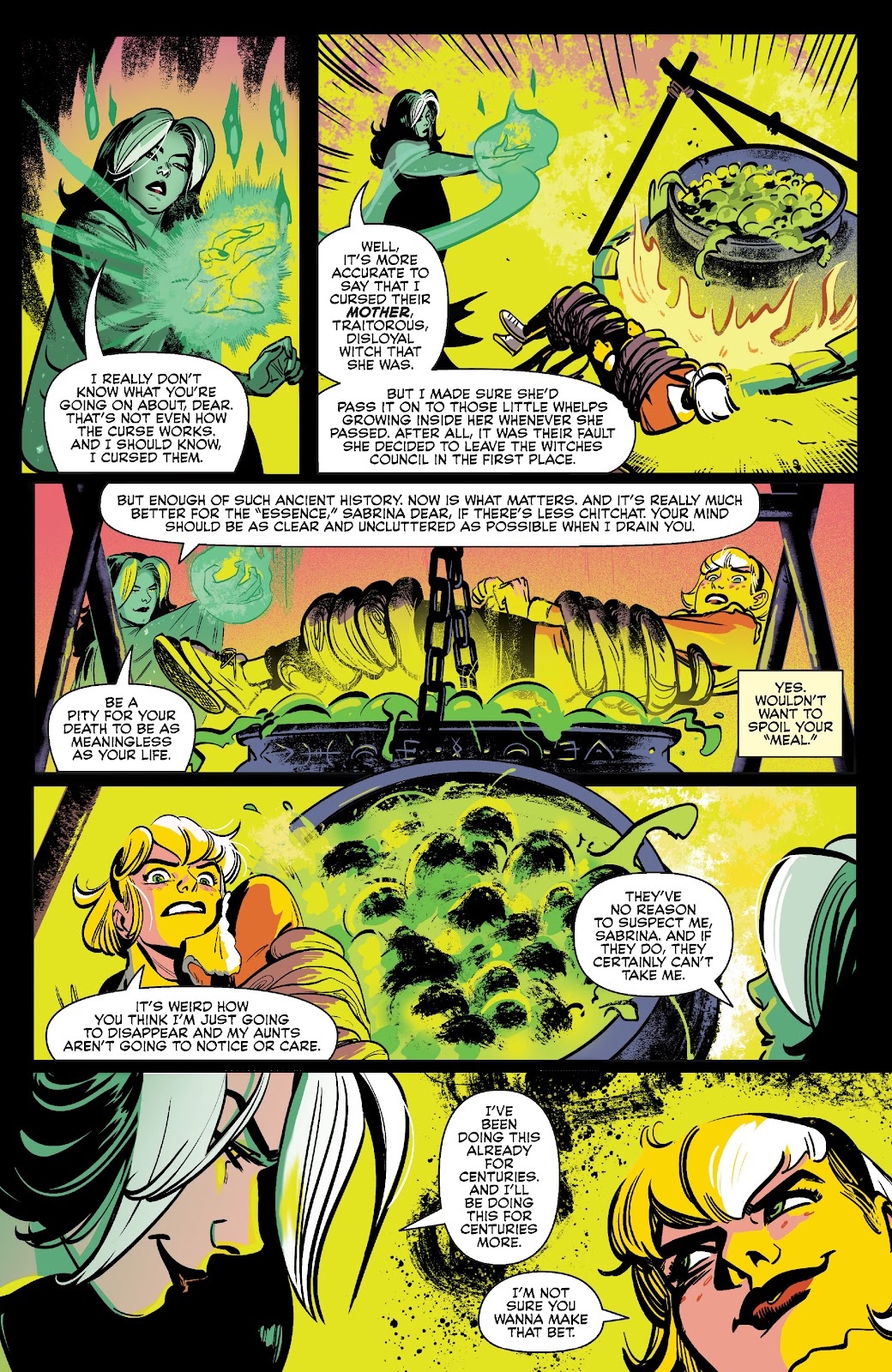 Artists, Veronica and Andy Fish, nail the comedic timing of Ren, Radka, and Sabrina trying to communicate with each other while tied up and while Della is still within earshot. They also nail the final showdown between Della and Sabrina (think the wizard chess game in Harry Potter and the Sorcerer’s Stone, with all the trappings of good vs evil – the noble knight vs. a Maleficent-like villain).  The colors do get a bit busy, and not in a good way. Della is a constant green, which adds to her show of strength, but the inside of her cottage is a barrage of colors that can be difficult to take-in for multiple pages.

Sabrina the Teenage Witch: Something Wicked #5 is on sale now from Archie Comics.

Erica Slaughter Returns In ‘Something Is Killing The Children’ #21

Preview: Power Plays And Uncovered Plots In ‘The Killer: Affairs Of The State’ #4